Currently, I am teaching a course in Advanced Microeconomics where I have started with the premise that conventional economic theory, both Micro and Macro are fundamentally wrong. The number of ways in which they are wrong cannot even be counted. Instead of enumerating errors, the course is devoted to providing a constructive alternative. A lot of the early lectures deal with the basic concepts of optimization and equilibrium, the fundamental building blocks of conventional courses, and explain how these are wrong. I also explain how economists are using a wrong methodology, and how they misunderstand the concept of a theoretical model, and the relations between models and reality. The video-taped lectures, PPT slides, and some supporting materials, are available from my website: https://sites.google.com/site/az4math/

Originally, I had not planned to teach Karl Polanyi because his theories are significantly more complex than those of Karl Marx and Adam Smith. However, because the class has been very receptive, and has understood the what I have been teaching, I have decided to explain his ideas. We have already started discussing his ideas starting from Lecture 13, and have finished Part I of the Great Transformation in Lecture 16. In order to prepare for the complexities of Part II, I have distributed the following handout to the class, to explain the complex general methodological framework which underlies Polanyi’s analysis.

Polanyi operates at a meta-theoretical level. This means that he analyzes theories which emerged as people tried to understand the historical process of social change that was taking place. A diagram may help to make this clearer: 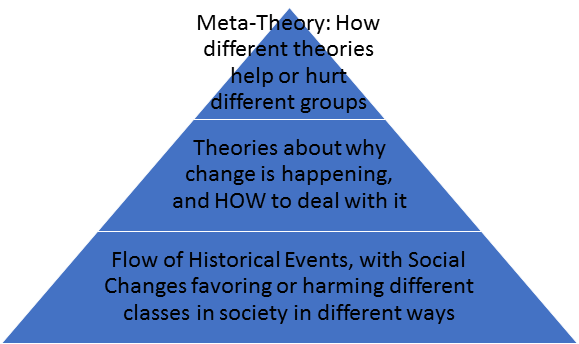 To understand Polanyi, we have to be able to think on three levels at once. At the first level, we have HISTORY, which is just a set of events and observable processes taking place in the real world. Polanyi concentrates on the process of social change. Thinking in terms familiar to economists, Polanyi posits that we start at some equilibrium outcome of previous historical processes, and then we introduce a factor which creates a disturbance in this equilibrium. The process of social change is initiated “as a rule, by external causes, such as a change in climate, in the yield of crops, a new foe, a new weapon used by an old foe, the emergence of new communal ends, or, for that mat­ter, the discovery of new methods of achieving the traditional ends.“

The goal of the book is to analyze this process of social change. In our class, we are not studying European, and in particular, English history, to learn about what happened in England over the past few centuries. We are learning this to understand the process of social change, and especially how this process generates theories about social change. The social change process affects different groups of people in the society in different ways. These groups think about the change which is taking place and try to analyze it. As Polanyi says, in the early stages of social change, people are naturally quite confused about what is happening, and often the theories they come up with, to try to understand the change, are very poor. Nonetheless, it is in the light of these theories that they respond to what happens. It is very difficult to think in terms of abstractions, without having specific concrete illustrations in mind. Therefore we provide an example to illustrate these ideas.

ILLUSTRATION: The process of enclosures dispossessed large number of people from access to land, thereby creating a new class of people unable to survive on their own. This was how “poverty” was created. This requires further clarification — while the poor have always been with us, they have not been a social problem because they have access to land, which can provide subsistence level sustenance. They also have social sympathy, which provides for their urgent needs in emergencies. The market economy destroys both of these support systems, and thereby turns poverty into a social problem.

The creation of the poor, without any means of survival, is what created the labor class, which enabled an early start to the industrial revolution in England. The question of “who are the poor?” was widely debated, with diverse answers being given, in the 18th century. When the French Revolution took place, the question became pressing, since there was fear among the wealthy that mass unrest among the poor might lead to a similar outcome in England. The majority of the theories attributed the emergence of the poor to external causes, and therefore advocated humane measures which would provide them with the help and assistance they needed to survive. In the midst of this debate, the publication of Malthus’ Essay on Population came as a bombshell. According to Malthusian theory, the cause of poverty was over-breeding – the poor population increased geometrically due to high birth rates, outstripping the increases in food supply which increased linearly. Thus, socialistic measures to help feed and shelter them would increase poverty, by increasing the number of the poor. Responses to poverty were then taken along lines in accordance with Malthusian ideas. Support was provided in poor-houses, but the conditions were degrading and humiliating. Segregation by sexes and sterilization were also Malthusian remedies.

In fact, Malthusian theories were wrong, as has been amply established since then. Food supplies over the centuries have increases at a rate slightly faster than the geometric growth of population over the past two centuries. Also, research has shown that poor have children as old-age insurance policies. In environment of high uncertainty and mortality, they have more children. Given social security, the birth rates go down. So Malthus reversed the cause and effect relationship, and supported extreme cruelty to the poor as being a natural part of a system of checks-and-balances on population:

we should facilitate, instead of foolishly and vainly endeavouring to impede, the operations of nature in producing this mortality; and if we dread the too frequent visitation of the horrid form of famine, we should sedulously encourage the other forms of destruction, which we compel nature to use. Instead of recommending cleanliness to the poor, we should encourage contrary habits. In our towns we should make the streets narrower, crowd more people into the houses, and court the return of the plague. In the country, we should build our villages near stagnant pools, and particularly encourage settlements in all marshy and unwholesome situations. But above all, we should reprobate specific remedies for ravaging diseases; and those benevolent, but much mistaken men, who have thought they were doing a service to mankind by projecting schemes for the total extirpation of particular disorders

Even though Malthusian theory was deadly wrong, it was widely adopted and continues to command popularity. Now the meta-theoretical question arises: WHY? Even at that time, and more so now, there is a wide variety of alternatives theories available. Among these choices, why was Malthusian theory selected as the basis on which a response to poverty was crafted at the beginning of the nineteenth century in England? The answer has to do with how Malthusian theories suited the interests of the rich and powerful. The theory appeased their consciences by taking away their responsibility, and the policy interventions it suggested interfered only minimally with their profits. Alternative theories would have increased their responsibility and required more expensive interventions. Because of the ability of the rich and wealthy to control the narrative, they were able to ensure that this theory became widely accepted, even though there was no empirical evidence for it.

CONCLUSIONS: Many of the ideas of Polanyi about the process of social change can be explained with reference to this episode. Some of the important lessons are as follows:

The enthusiastic response and reception to the radical ideas that I have been teaching has encouraged me to go further and deeper than I had intended to initially. This essay attempts to clarify one of the major hurdles to understanding Polanyi – the need to understand three layers of thinking in order to arrive at the meta-theoretical perspective of Polanyi. In the lectures, we will illustrate this perspective in many different historical contexts. It will be helpful to have this framework in mind, to understand the common method of analyses being applied to a diverse set of situations.