Many leading economists have come to agree with Nobel Laureate Stiglitz that modern economic theory represents the triumph of ideology over science. One of the core victories of ideology is the famous Quantity Theory of Money (QTM). The QTM teaches us that money is veil – it only affects prices, and has no real effect on the economy. One must look through this veil to understand the working of the real economy. Nothing could be further from the truth.

In fact, the Q 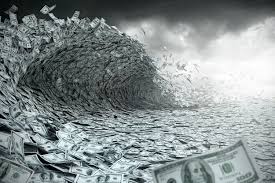 TM itself is a veil which hides the real and important functions of money in an economy. The Great Depression of 1929 opened the eyes of everyone to the crucial role money plays in the real economy. For a brief period afterwards, Keynesian theories emerged to illuminate real role of money, and to counteract errors of orthodox economics. Economists believed in the QTM, that money doesn’t matter, and also that the free market automatically eliminates unemployment. Keynes started his celebrated book “The General Theory of Employment, Interest and Money” by asserting that both of these orthodox ideas were wrong. He explained why free markets cannot remove unemployment, and also how money plays a crucial role in creating full employment. He argued that in response to the Depression, the government should expand the money supply, create programs for employment, undertake expansionary fiscal policy, and run large budget deficits if necessary.

Free market economists believe that markets work best when left alone, and any type of government intervention to help the economy can only have harmful effects. Even after the Great Depression, they continued to argue that the government intervention would only cause further harm, and the free market would automatically resolve the problems. However, it was obvious to all that the massive amount of misery called for urgent action. QTM was discredited and mainstream economists accepted Keynesian ideas, rejecting free market ideologies. US President  Franklin Delano Roosevelt (FDR) started his campaign with orthodox promises to balance the budget but converted to Keynesianism when faced with the severe hardships imposed by the Great Depression. He later said that “to balance our budget in 1933 or 1934 or 1935 would have been a crime against the American people.” In the 1960’s, the aphorism that “We are all Keynesians now” became widely accepted.

Free market ideologues like Friedman and Hayek patiently bided their time, while preparing the grounds for a counter-attack. Their opportunity came when stagflation – high unemployment together with high inflation – occurred in the 1970’s as a result of the Arab oil embargo. They skillfully manipulated public opinion to create the impression that economic problems were due to Keynesian economic theories, and could be resolved by switching to free market policies. The rising influence of free market ideology was reflected in the election of Reagan and Thatcher, who rejected Keynesian doctrines. Milton Friedman re-packaged old wine in new bottles, and the QTM went from being a discredited eccentric view to the dominant orthodoxy. Throughout the world, including Pakistan, monetary policy had been based on the Keynesian idea the money supply should be large enough to create full employment, but not so large as to create inflation. However, monetarists succeeded in persuading many academics and policy makers of the pre-Keynesian ideas that money only affects prices, and has no long run effects on the real economy.  Central Bankers were persuaded to abandon the Keynesian idea of using expansionary monetary policy to fight unemployment. Instead, they started to focus on inflation targets. Forgetting the hard learned lessons of the Great Depression led to The Global Financial Crisis. Excess money creation for speculation led to a boom in housing and stock markets, followed by a crash very much like that of the Great Depression. Chastened Central Bankers remembered Keynes and took some actions necessary to prevent a collapse of the banking system. A deeper understanding of money could have prevented the Great Recession which followed. The truth is exactly opposite of the QTM idea that money does not affect the real economy. In fact, money plays a central role in the real economy. The mystery of why, even after repeated rejections, such an obviously wrong theory continues to dominate will be addressed in later articles.

8 thoughts on “The Veil of Money”